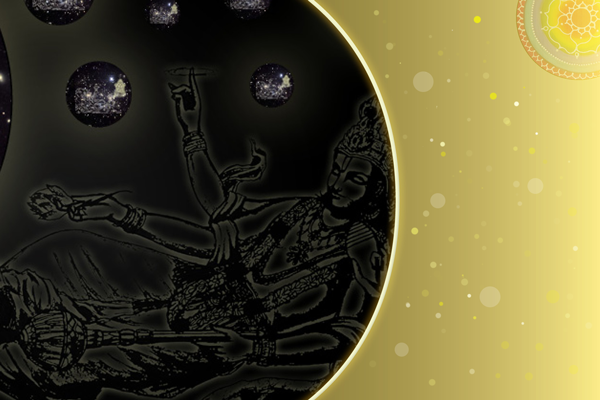 Devotee: In the Bhagavad Gita, Bhagavan says, tasam brahma mahad yonir aham bija pradah pita. So what is that brahma that he speaks of?

Swami B. R. Sridhara: Tal-linga bhagavan sambhuh - tasam brahma mahad yonir - The original conception of prakrti (material nature) is that it is also conscious and personal. Maya is also conscious, in that, she also has got her personality. There is Brahma-loka and viraja. The viraja side is prakrti. Brahma means brhat - the prakrti as a whole. The ksana is the ray of bija (seed) sent by tal-linga bhagavan sambhuh. The ray is the linga from Maha-Visnu and that enters into viraja. Apa eva sasarjadau - there in the material waters gradually they are mixing and becoming mahat-tattva as a whole. Like this so many particles of mahat-tattva, and so many brahmandas (universes) are generated. In this way prakrti divides itself into many.

Brahma mahad-yonir - this plane of viraja is lower to the plane of jiva souls. Brahma brhad yonir  - this is the first place where creation begins - the earth - jada-prakrti - the jagat-srsti begins, the material creation begins. The ray comes as the ingredient, the suggestion, coming from above to the prakrti as a whole. Brahma means brhat-yoni. Brahma is the most original and absolute position of the apara-sakti (material energy). And the suggestion from the transcendental world - para-shakti - comes to move her. In this way the mediation happens  and then the creation begins.

At first there was apa. Apa means viraja water. In the apa, the bija, the seed was thrown. And then gradually the seed went up. Hare Krsna! Hare Krsna!

This has been expressed at different places using different words, but the purport should be hit and harmonized.