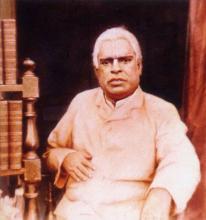 In the beginning of Srimad Bhagavad Gita’s fourth chapter, which is entitled Jnana-yoga (the yoga of knowledge), Bhagavan Sri Krishnacandra told Arjuna that previously He had instructed the sun-god on the topic of the perfection of nishkama-karma (activities without material desires) within jnana-yoga. The sun-god explained this knowledge to Manu, who in turn instructed Iksvaku. In this way the saintly kings obtained realisation of yoga via the parampara. This system of yoga almost perished due to its absence for a long time. This knowledge was given by Him to Arjuna because Arjuna was His devotee and friend. After hearing this from Sri Krishna, Arjuna played the role of a materialistic historian and put forward the argument, “O Krishna! Surya was born many years before and You were born in recent times. How can I believe that You have instructed Surya on the abovementioned yoga many years before?” Sri Krishna answered –

Sri Krishna said, “My dear Parantapa Arjuna! Both you and I have passed through many births. Being the Supreme Lord, I remember all of them. You are a minutely conscious jiva, hence you don’t remember any of them. Whenever I descend to the world, My perfected devotees also appear with Me to nourish My pastimes. But I am the only all-knowing Purusha who is cognizant of everything.

The Transcendental Position Of Sri Krishna 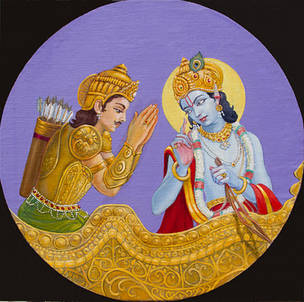 Although all of you and I come to this world again and again, there is a categorical difference between My appearance and yours. I am the Master of all creation, beyond birth and imperishable by nature. With the help of My internal potency, I appear in this world. But the jivas are controlled by My maya-shakti to take birth in this world. In this way they cannot remember their previous births. As a result of their karma, taking shelter of their subtle body (linga-sharira), they attain another birth.

I appear in the form of demigods, and even in lower species etc. This occurs only due to My independent desire to this effect. Unlike the jiva, My pure conscious form is not covered by a gross and subtle body. Whatever eternal form I have in Vaikuntha, that very same form I manifest effortlessly in this material realm. You may ask, how does pure consciousness manifest within the material realm? Listen – My power is indisputable and beyond the reach of all types of thought processes. Therefore whatever can be possible through it cannot be understood simply by your reasoning. It is enough if you dutifully understand with your normal intelligence that Bhagavan, who is unimaginably powerful, is not bound by any regulation pertaining to this material world.

By His will He can manifest the entire vaikuntha-tattva effortlessly in its pure form in this mundane world, or convert the entire material creation into the spiritual world. In that place, My saccidananda-vigraha (form of eternity, bliss and knowledge) is beyond the rules of this material realm and in spite of manifesting in this world, it remains completely pure. How can it be doubted?

Although maya, who controls the jivas, is also owned by Me, one must also understand that My very own nature is spiritual. My potency is one, yet to Me that potency is spiritual while to the conditioned jivas it is the illusory potency and has various kinds of influence.

Why, When, and Where Does the Lord Appear?

I appear only due to My supreme will. Whenever I desire, I manifest. Whenever there is degradation in dharma and a rise of adharma, then I manifest due to My own will. My rules and regulations governing universal affairs are unconquerable.

However, due to the influence of time, when all these rules and regulations lose their qualities for no particular reason except for faults arising with the passing of time, adharma gains more prominence. Except for Me there is no one who is capable of rectifying those faults. Therefore I appear with My own cit-sakti in this material world and rectify the degradation of dharma.

It is not that I appear only in the land of Bharata. Depending on the necessity, I appear in all places inhibited by demigods or demons due My own will. So do not think that I never appear in the land of Mlecchas and other lower races. Depending on the extent and depth to which those men have accepted true dharma as their own religion, then that much degradation is also rectified and I safeguard dharma as a shaktyavesha-avatara.

But in the land of Bharata, since varnashrama-dharma is effectively practiced there as one’s prescribed duty (sva-dharma), I consider the countrymen of this land as My subjects and I am more concerned in mercifully establishing dharma there. Therefore you will observe all the most charming avataras such as the yugavataras, amsha-avatara etc. within the land of Bharata. Where there is no varnashrama-dharma there is no proper execution of nishkama-karma-yoga or the perfection of jnana-yoga or the ultimate achievement of bhakti-yoga. But if it is observed amongst the lower classes (outside the varnashrama system) that there is a significant advancement in bhakti, it should be understood that it is the result of a devotee’s mercy that there is a sudden connection established. 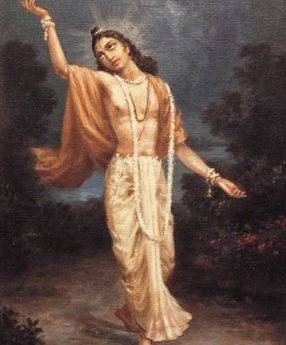 Within the saintly kings and others who are My devotees, I give them the empowerment in order to establish varnashrama-dharma. But for those sadhus who are great devotees, to save them from non-devotees, it becomes essential for Me to descend. Thus, by becoming the yugavatara I protect the sadhus, isolate the non-devotees and establish them in the religions meant for annihilation (nasya-dharma), and by preaching the devotional processes of hearing and chanting, I establish the jiva’s eternal constitutional position. It is said that I descend in every age – from this you can accept that I also descend in the age of Kali. The avatara for the age of Kali will establish the most rare prema only with the help of the paraphernalia used in kirtana. Since He has no other purpose, in spite of this avatara being the best of all avataras, He is hidden from the common people in general. My greatest devotees will naturally be especially attracted by that avatara. You will also be able to observe this by descending as His associate. This avatara, who is the deliverer from the age of Kali, will only annihilate the evil-propensity. Apart from that there is no killing of demons as in other ages. This is the supreme secret regarding this hidden avatara.

Who Will Attain Pure Devotion?

One who realises, through proper deliberation of previously revealed knowledge, the inconceivable spiritual potency through which I accept My divine birth and activities, never takes birth again after he leaves his body. He comes under the influence of the manifestation of My spiritual potency, the hladini-sakti, and achieves My eternal service.

Those who, due to lack of proper knowledge, come to the conclusion that My birth, activities and form are manifest from this material world and are temporary and mundane, are cast into this cycle of birth and death as a result of their ignorance. By coming to such conclusions, men under the influence of materialistic activities remain entangled in mundane deeds. Without the mercy of a sadhu, they cannot attain pure devotion.