Srimad Bhagavad Gita in English | with Commentary by Swami B. G. Narasingha

Presenting Srimad Bhagavad Gita - Sri Krishna's illuminations on the perfection of Yoga, with an english commentary by Swami B. G. Narasingha for the 21st Century.

Why Read The Bhagavad Gita?

I especially appreciate the contemporary nature of the commentaries. They're neither too wordy nor terse. Just right to make me understand. Thanks for the great publication.

I live in Bangalore and the product reached me on the same day. I've only read the first two chapters and was inspired to write a positive review. I must say the commentary is fully top-notch - clear, practical, and for the present times. +1 :)

Very happy to have this Bhagavad Gita with me. I wish the book was also available in Hindi. I would have ordered it for my parents.

I collect religious texts as a hobby. Recently ordered this version online. The shipping was fast and smooth and the product worthy of collection. Thanks for publishing such an enduring and enigmatic Bhagavad Gita.

I had many unanswered questions on Hindu philosophy in the Bhagavad Gita. I'm satisfied that this publication satisfies most of them. A must read !

Excellent publication with a crisp translation and explanation. The presentation is just beautiful, and the book will stay for generations. I suggest this version of Srimad Bhagavad Gita for everyone.

Rich in elegance and style, this publication of the timeless Srimad Bhagavad Gita features:

Swami Bhakti Gaurava Narasingha was born in 1946 in the USA and grew up in California, Florida and Hawaii. His first introduction to yoga was through Swami Vishnudevananda and his first contact with Srimad Bhagavad Gita was through reading Autobiography of a Yogi by Yogananda. In 1967, Swami Narasingha came in contact with the teachings of A.C. Bhaktivedanta Swami Prabhupada and in 1970 he became his direct disciple and student of the Srimad Bhagavad Gita. In 1976 Swami Narasingha became a sannyasi (monk) and traveled extensively for many years in India. continue reading ...

A Short Video about Swami B. G. Narasingha 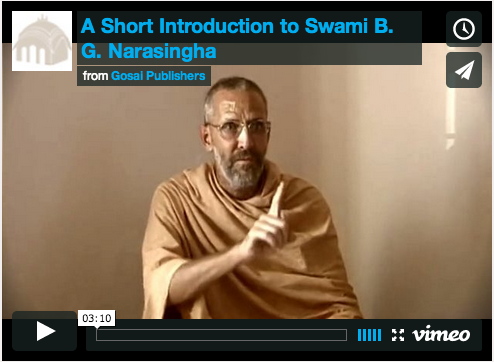 A short video on Swami B. G. Narasingha by Gosai Publishers on Vimeo.

War is nothing new to this world. Thousands of years ago wars were being fought, such as the one at Kurukshetra, to resolve the differences between good and evil and for the purpose of material gain. From ancient times to our modern era, practically not a day on this earth has passed when someone, somewhere, was not fighting over something. Throughout history men have gathered on the field of battle to fulfill their greed for wealth and glory, sometimes nobly, but more often ignobly. The same is happening in the 21st Century. War it seems is an unavoidable karmic destiny of human civilization.

Peace, on the other hand, is rather elusive. Peace is talked about and even prayed for, but seldom makes more than a momentary appearance. Most of our lives, even for the humblest of souls, are spent struggling for existence either socially, politically, financially, mentally, or physically. For most of us the temporary absence of any major crisis is what we would call peace. However, peace (or shanti as it is known amongst yogis) is a state of consciousness and not a condition relative to the external affairs of the material world. Peace is an internal experience.

The wisdom of the Vedic literature, Srimad Bhagavatam says, jivo-jivasya-jivanam – one living being is food for another living being. From the minutest forms of life to the most complex, one life is sustained by the loss of another. Thus, the basic principle for material existence is fundamentally flawed with violence. Peace then, for most of us, comes in doing what we have to do and believing that we have done the right thing. Therein lies the fine line between war and peace. Is what we think to be good, or what we are conditioned to believe, actually right?

The ability to discriminate between right and wrong, or in some cases good and evil, largely depends on the extent of knowledge from which we draw our conclusions. A poor fund of knowledge naturally results in faulty conclusions. Therefore, it is in our best interest to seek out the greatest source of knowledge – knowledge of the Absolute Truth, and familiarize ourselves with that.

Know more about the burden of afterflife, the greatest charity, the best Yoga system, and following Krishna. Also, know about how Bhagavad Gita hints at a plausible solution for the Missing Mass problem.

By:
Swami B. G. Narasingha

Bhagavad-gita truly begins from the second chapter. Bhagavad-gita literally means the ‘Song of Bhagavan’ and Bhagavan means the Absolute Truth. Here for the first time in Bhagavad-gita, Shri Krishna is addressed as Bhagavan. According to Vedic scholars such as Parasara Muni, Bhagavan means one who possesses all wealth, strength, fame, beauty, knowledge and renunciation.

By:
Swami B. G. Narasingha and Satyaraja Dasa

In modern times the influence of India's spiritual thought in America has taken leaps and bounds. Turbulent peace-seeking days of the sixties and seventies opened the doors for alternative thinking, and Spiritual India was welcomed with open arms.

What is the greatest danger according to the Bhagavad Gita?

By:
Swami B R Sridhara Goswami

Krishna is abhaya - beyond apprehension. By participation in His service there is no fear. Otherwise, mukti is like a strike in the organic system. That must be avoided. We have no right to misuse/abuse the service in a factory, or to declare a strike, that is cessation of service - both are abnormal.

By:
A. C. Bhaktivedanta Swami Prabhupada

Sannyasins who follow the philosophical path of acarya Sripada Sankara are now generally known as Vedantists. Those who follow the philosophical paths of Vaisnava acaryas such as acarya Sripada Ramanujacarya, Sripada Madhvacarya, Sripada Visnu-svami etc. are known as the Bhagavatas. The so-called Vedantists designate the followers of Vaisnava acaryas as Bhagavatas whereas for themselves they think that Vedanta philosophy is the monopoly subject matter for the studies of the Sankarites only. Following this principle, some other classes of sannyasins who are not recognized either by the Sankarites or by the Vaisnavites also designate themselves as Vedantists.

The original conception of prakrti (material nature) is that it is also conscious and personal. Maya is also conscious, in that, she also has got her personality. There is Brahma-loka and viraja. The viraja side is prakrti. Brahma means brhat - the prakrti as a whole. The ksana is the ray of bija (seed) sent by tal-linga bhagavan sambhuh. The ray is the linga from Maha-Visnu and that enters into viraja.

In the beginning of Srimad Bhagavad Gita’s fourth chapter, which is entitled Jnana-yoga (the yoga of knowledge), Bhagavan Sri Krishnacandra told Arjuna that previously He had instructed the sun-god on the topic of the perfection of nishkama-karma (activities without material desires) within jnana-yoga. The sun-god explained this knowledge to Manu, who in turn instructed Iksvaku. In this way the saintly kings obtained realisation of yoga via the parampara.

Questions about life addressed in the Gita

Many people claim that life comes from dead matter, that the feeling of the self is nothing but a complex neurological phenomenon. However, the neurologists are nowhere near the answer to the fundamental question of consciousness. Moreover, some scientists like Dr Robert Lanza (An eminent modern-day biologist known for his theory of Biocentrism) are even considering consciousness, not as a phenomenon, but as an independent non-material entity in itself. In Srimad Bhagavad Gita, Sri Krishna addresses this question right in the beginning that we are individual units of consciousness called the jiva. To understand the intrinsic function of the jiva and more than just the 'A', 'B', 'C's of spiritual wisdom, read the Bhagavad Gita.

To ignorantly consider that we are our bodies is the primary cause of suffering in the material world. Nevertheless, nothing in this world happens by chance. We suffer and rejoice as a result of our previous actions or karma. In the Bhagavad Gita Krishna counsels Arjuna on the laws of karma and affirms that He does not create anyones karma. Therefore, our own past actions and not Krishna is to be blamed for our sufferings. You are invited to read the Karma Yoga section of Srimad Bhagavad Gita wherein Krishna gives the secret to happiness.

In Bhagavad Gita Krishna counsels Arjuna that everyone including Krishna Himself exist eternally as individual entities and therefore there is no question of when were we created. However, Krishna is the supreme person and other living entities are subordinate to Him. By nature our best interest lies in the service of the supreme person Sri Krishna. Forgetting our true relationship with Krishna, we have chosen to wander in the material world. We shall find wholesome satisfaction and fulfillment only in a relationship with Sri Krishna and no where else. Study Srimad Bhagavad Gita for the revival of your true nature.

This age old question has troubled scientists and philosophers alike from time immemorial and will continue to pose as the biggest mystery for those that have not scrutinized the Bhagavad Gita. For the students of Srimad Bhagavad Gita death is just another transition from one body to the next. The challenge is how well we apply in our lives the teachings of Sri Krishna to get out of the cycle of birth and death, and realize our true relationship with Krishna. Plain Moksha or liberation is not the ultimate end. Read the Gita » to know the loftiest ideal of human life.

Quotes from the Gita ...